The Nomura Group has undertaken a variety of activities to assist people and communities affected by the Great East Japan Earthquake through its businesses and the voluntary efforts of employees. We will continue to support the initiatives of our employees to address the needs of the stricken areas and of society as a whole.

Since 2012, Nomura has been working hand in hand with local groups to make Tohanayama Hill in Yamamoto Town, Watari District, Miyagi Prefecture, a notable cherry blossom ("sakura") viewing spot. The Watari District suffered severe tsunami damage in the Great East Japan Earthquake. With the eleventh semiannual event held in April 2017, we commemorated the steady growth of the newly planted trees by inviting local people and children to enjoy the blossoms and join with us in planting more saplings. Approximately 800 employees have participated in these activities to date.

Since 2012, Nomura has been supporting the "Mt. Tohana Cherry Blossom Association", a local group striving to make Tohanayama Hill in Yamamoto Town, Watari District, Miyagi Prefecture, a notable cherry blossom ("sakura") viewing spot. Nomura employees have made donations to purchase cherry blossom tree saplings and employee volunteers from across the country gather twice a year to plant trees, help with environmental protection of the mountain and support maintenance of the mountain paths.

Nomura supports the "New Tohoku" restoration business contest organized by the Reconstruction Agency, awarding the Nomura Award in support of regional industries that promote industrial recovery in disaster-stricken areas. In 2015, Nomura awarded Bakke-Yaki Potter Hiro-Gama for their business entry into Europe and plans to build a Bakke-Yaki community village. Since the contest, Nomura has continued to provide the Bakke-Yaki potter with advice on business development and has also ordered Nomura Group's 90th anniversary memento as part of its support efforts. 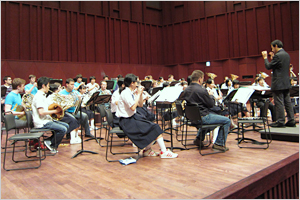 The Nomura Group has been jointly sponsoring charity concerts with the Pacific Music Festival, an international musical education festival, since 2011. Proceeds from ticket sales, fundraisers at concert halls and donations from employees in 2011 were used to grant a total of 30 instruments to 17 elementary and junior high schools in Miyako in Iwate Prefecture, Sendai in Miyagi Prefecture and Iwaki in Fukushima Prefecture. In 2013, we used the proceeds from the previous year to organize musical education programs for brass band members at two junior high schools in Miyagi Prefecture.

In the fiscal year 2014, we offered musical education programs for elementary and junior high school students in Soma, Fukushima Prefecture.

The School Smile Support Project was launched by educational consulting firm Career Link, Inc. Following the Great East Japan Earthquake. The Nomura Group has been supporting several events organized as part of this project, including the Sports Festival Support Caravan, which began in 2011 to help organize sports festivals at elementary and junior high schools, and the Career Challenge Day, which was launched in 2012 to provide career education to second-year students from all junior high schools in Ofunato, Iwate Prefecture.

The Nomura Group has been inviting internal and external experts to take part in speaker events that help employees gain a deeper understanding of the current conditions in areas affected by the disaster. Employees are also encouraged to think about what they can do as a company and as individuals toward restoring these areas and dispelling hurtful rumors. Employees who are unable to visit the areas can learn about the situation there through these events and apply the information in their personal support efforts.

The Nomura Foundation provides a scholarship for university students in stricken areas to financially support individuals facing hardship due to the disaster, to foster researchers and to promote regional education. The foundation donated a total of 100 million yen in 20 million yen annual disbursements, over a five-year period beginning in 2011, to Iwate University, Tohoku University and Fukushima University, since these institutions offer graduate degrees in the social sciences and serve many students from the affected areas.

Voluntary Activities and Fundraising by Employees

In addition to the activities noted above, the Nomura Group has encouraged employees to participate in volunteer efforts, raise funds at office locations, and use agricultural products from the affected areas at in-house food services to help reverse negative public perceptions. We continue to support the volunteer activities of our employees to address the needs of the affected regions and of society as a whole.