Nomura International plc (NIP), Nomura Group's UK subsidiary received the platinum clean city award for the third consecutive year. This system was established in 1994 by the City of London and presents awards each year to companies that have been successful in reducing their waste - an issue that both makes the city unsightly and can be a hazard. Following the principle of "Reduce, Reuse and Recycle", upwards of 1,700 companies of differing sizes and from different industries, participate in the initiative including small shops, financial institutions and multinational corporations. Depending on the level of achievement participants receive either a platinum, gold or merit award. Only the top 20 companies receive the platinum award which is the highest level, while 180 companies receive the gold award and the remaining participants receive a merit award. After receiving the gold award for 4 consecutive years from fiscal 2002, NIP has received the platinum award for 3 consecutive years since fiscal 2006. 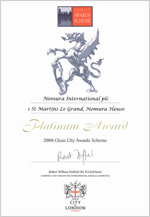 NIP obtained ISO14001 certification in 2007 and has continued to proactively carry out an environmental program. In addition to recycling paper and refuse or waste and reusing IT equipment, NIP is working to keep down overall building energy consumption using "The Night Watchman", a program that automatically shuts off computers at night and lighting that is equipped with sensors to automatically turn lights on and off by detecting people. The fact that NIP has received the clean city award in recent years shows that people outside the company recognize how NIP's initiatives have led to positive results.