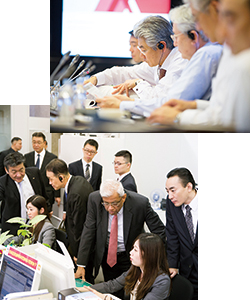 Nomura Holdings formed its Advisory Board in 2001 to advise the firm's Executive Management Board, which is responsible for making decisions on business executions.

In 2015, Nomura newly appointed four preeminent Asian leaders as Advisory Board members and up until March 2019 held seven meetings in Tokyo, Singapore and other cities. Nomura Executives were in attendance at each meeting and received advice from a variety of perspectives on matters including Nomura's business development in Asia, effective running of business operations and ways to foster human resources.

In 2020, Nomura is pleased to welcome the first non-Asian member to the Advisory Board to help advise management from a more global perspective.

Interview with Advisory Board Member

Please give us your view of the global economic situation, including the uncertainty in financial markets.

The current slowdown in the developed economies, and to some extent the emerging economies, will continue to lead to uncertainty in the financial markets. Slower global growth rates are a structural issue. For the developed economies generally, we see a continued decline in productivity growth. There is no easy way to achieve sustained growth in the future, and countries will have to raise productivity through long-term measures of investment in new technologies, education and continuing re-training of workers.

Looking at the Asian region, the Chinese economy is currently in a transition phase. As their labor force ages and growth slows, moderation in the economic growth rate is expected. The Chinese government is also looking at rebalancing the Chinese economy away from exports toward internal consumption and services. There will be some short-term adjustment costs.

I am optimistic about the longer-term prospects of the regional economies, in particular China, India and ASEAN. The number of middle income consumers continues to grow. If they manage to successfully reform and make the transition, the potential is immense.

Geopolitically, there are areas of disputes over sovereignty of islands and seas. They get head-lined. But I believe these disputes will be managed. Put these disputes in the multi-dimensional and long-term context of relations between the disputing countries, and it is clear that there is too much to lose for all if they get out of hand.

What role do you think Japan and globally active Japanese companies should play amid the current environment?

Japan and its companies should find ways to work with and invest in other economies in the region. There are areas, such as robotics or infrastructure technology, that Japanese companies have an advantage in, and Japanese companies will do well to export their expertise, in particular to the emerging economies.

Asia ex-Japan needs immense investments in infrastructure such as for transport and energy. The Asian Infrastructure Investment Bank (AIIB) has been set up, although Japan is not involved, so we are on the verge of having a global system for establishing infrastructure. Japan has also expanded its Partnership for Quality Infrastructure program, under which Japanese agencies would partner with the Asian Development Bank (ADB) in providing up to $200 billion in funding for infrastructure projects over the next 5 years. With funding available for infrastructure from the ADB and AIIB, Japanese companies which have expertise and experience in executing major projects will benefit.

Even for China's proposed One Belt One Road (1B1R), there will be opportunities for Japanese companies. The Maritime Silk Road, for example, will benefit Japan, given that Japan is a major commercial maritime nation.

What is your view of Nomura's initiatives aiming to contribute to the development of Asian capital markets?

The Nomura Group has great growth potential in Asia. Having firmly established itself in the Japanese market, Nomura can build on its strong working relationships with Japanese firms and existing networks in its Asian offices, and work as a bridge for Japanese companies to invest their funds in other countries. In particular, I see Southeast Asia and India as regions where Nomura can expand its reach and invest even more resources. This is a particularly good window for Nomura as traditional investment banks from the West are looking to reduce their roles in emerging markets.

I suggest that Nomura increase its brand awareness in these markets, and establish itself as a trusted partner in the emerging markets. It also can draw on its wide networks in the Japanese market, pick up detailed messages from customers, and seek to link Japanese companies with other partners that are looking for advice in addition to investment funds.

Not only is the management team hardworking but it is also very much on the ball. As I understand it, the setup of the Advisory Board is part of Nomura's aim to look beyond Japanese markets and explore new ideas with non-Japanese advisors. To me, this is an enlightened approach as I understand that most Japanese companies tend not to have foreign directors and advisors.

The Nomura Advisory Board comprises preeminent persons from throughout Asia. The Advisory Board's current members, Mr. Wanandi from Indonesia, Mr. Parekh from India and Mr. Trakulhoon from Thailand all have expertise and fine track records, and we are capable of providing Nomura with appropriate opinions from various different perspectives. It is my desire to play a role ensuring the Advisory Board will be actively utilized as an advisory organ by the Nomura management team.

The management team should continue to challenge the Advisory Board by asking good questions and seeking more in-depth knowledge from us.

I think before future meetings, the management team can pose specific questions or areas which they want the individual advisors to comment on. Advisors are not "all-knowing." But they can do some research and thinking on these issues before they meet the management team.

For me, I hope to contribute to Nomura's growth by sharing my insights on the global and regional political and economic landscape. Personally, I have also learnt from sharing with the Nomura management team and the other board members.