Net revenue for the third quarter was 402.1 billion yen (US$3.9 billion)2 , up 9 percent quarter on quarter and 20 percent year on year. Income before income taxes was 131.3 billion yen (US$1.3 billion). Net income attributable to Nomura Holdings shareholders was 98.4 billion yen (US$954 million).

"We reported our strongest results for the April to December period in 19 years3. Our Wholesale business remained robust and we continued to diversify our revenue drivers. Retail delivered a resilient performance, while assets under management in Asset Management reached a record high. As a result of our ongoing efforts to control costs, we are well positioned to deliver consistent earnings across our global franchise. We remain committed to ensuring sustainable growth," said Nomura President and Group CEO Kentaro Okuda.

2 US dollar amounts are included solely for the convenience of the reader and have been translated at the rate of 103.19 yen = 1 US dollar, the noon buying rate in New York for cable transfers in foreign currencies as certified for customs purposes by the Federal Reserve Bank of New York on December 31, 2020. This translation should not be construed to imply that the yen amounts actually represent, or have been or could be converted into, equivalent amounts in US dollars.

3 Since the year ended March 2002 when Nomura started reporting under US GAAP. 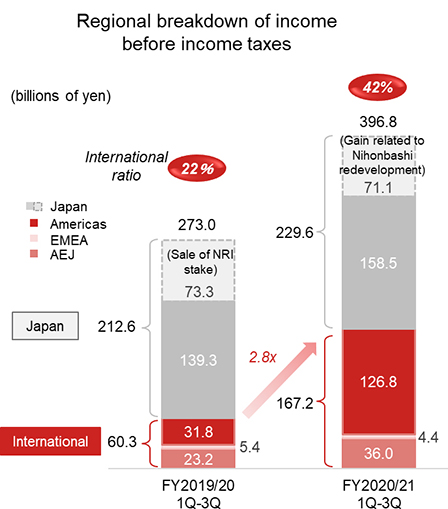 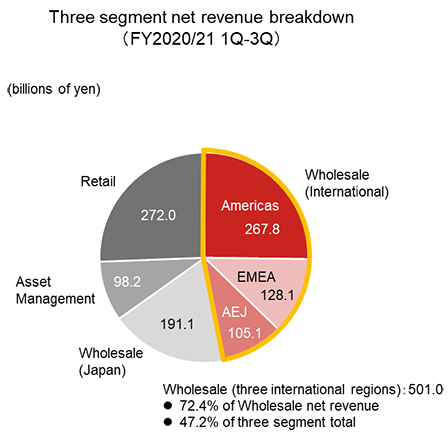 In the April to December period, Retail delivered a solid performance underpinned by channel realignment, branch office integration and non-face-to-face sales activities. On a quarterly basis, Retail income before income taxes was at a three-year high. This result was driven by robust sales of bonds and stocks supported by diversified approaches to clients and favorable market conditions, in addition to cost reductions.

Asset Management booked inflows of over 2.2 trillion yen in the first nine months, helping lift assets under management to a record high of 61.2 trillion yen at the end of December. In the third quarter, gain/loss related to American Century Investments contributed to the strongest net revenue and income before income taxes since the year ended March 2002.

For the first nine months to December, all business lines and regions reported stronger revenues, and cost reductions took effect, resulting in a 180 percent year on year increase in income before income taxes. On a quarterly basis, Wholesale booked the fifth highest net revenue and income before income taxes since the year ended March 2002 supported by a strong performance in the Global Markets Equities business and in Investment Banking.

Investment Banking net revenue was at the highest level since the third quarter of the year ended March 2012, driven by Japan industrial realignment and business reorganizations, cross-border M&A deals and mandates for public offerings and secondary stock offerings mainly in Japan. In addition, Nomura Greentech supported multiple sustainability-related deals and saw an increase in announced deals.

Nomura is a global financial services group with an integrated network spanning over 30 countries. By connecting markets East & West, Nomura services the needs of individuals, institutions, corporates and governments through its four business divisions: Retail, Asset Management, Wholesale (Global Markets and Investment Banking), and Merchant Banking. Founded in 1925, the firm is built on a tradition of disciplined entrepreneurship, serving clients with creative solutions and considered thought leadership. For further information about Nomura, visit www.nomura.com.