Nomura has been awarded the Fourth Make a CHANGE Day Incentive Award for its speaker events supporting the revival of areas affected by the Great East Japan Earthquake. 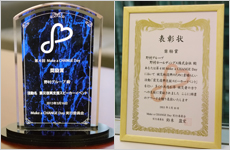 Hosted by the Make a CHANGE Day Planning Committee, Make a CHANGE Day is co-sponsored by the Asahi Shimbun newspaper and the Liaison Conference for Widening the Circle of Voluntary Activity, with the support of Japan's Ministry of Foreign Affairs; Ministry of Health, Labour and Welfare; Ministry of Education, Culture, Sports, Science and Technology; and Ministry of the Environment. Under the umbrella of "human connections," the award recognizes voluntary efforts by charitable and civic groups, NGOs and NPOs, companies, schools and families active in areas affected by the earthquake and throughout Japan as well as abroad. In 2012, the fourth year these activities were recognized, 1,648 entrants including leading companies, local governments and organizations from Japan and other countries took part in the award. 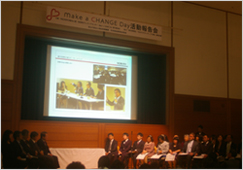 Since October 2012, Nomura has been holding a series of speaker events to support the revival of areas affected by the Great East Japan Earthquake. The purpose of these events is to encourage employees to take the initiative in determining what Nomura can do for the affected areas by inviting speakers from these places to share first-hand knowledge about the current situation there. The award selection process reflected the shared belief that Nomura's events represent substantive support for people in the affected areas.

Nomura has already held two speaker events in the series. The first was held in October 2012 under the theme "Agriculture is the key to revival" and introduced the work of Nomura Agri Planning & Advisory Co., Ltd., which supports regional revitalization through agribusiness. Speakers included a representative from ETIC (Entrepreneurial Training for Innovative Communities), an NPO that supports the revitalization of industries in the affected areas, and a student from Tohoku University who is working on reviving these areas through agriculture. The second event, held under the title "The current situation in Fukushima," took place in February of this year. Representatives from Nomura explained the collaborative agreement between Nomura Securities Co., Ltd. and Fukushima University and gained invaluable information on the current status of the affected areas from three guest speakers who had participated in the joint project and had been directly affected in Fukushima by the earthquake. 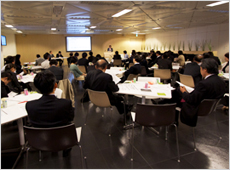 February 2013 - Speaker Event in Support of Revival II: "The current situation in Fukushima"

Nomura will continue to proactively engage in employee participation efforts to revive areas affected by the earthquake as well as similar initiatives to achieve sustainable development that meets the needs of the next generation under its overall goal, "For Future Generations."